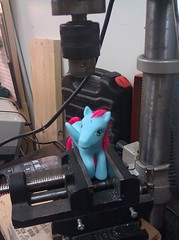 Here’s a status update on that Unicorn Build we undertook a couple of Sundays ago. We started by opening up this Chicago Tool soldering iron, which wasn’t trivial! Armed with a Dremel rotary tool and a succession of cutting wheels, we tore into the plastic handle to reveal these innards. Having separated the core from the handle, we went on to test the thermal insulating adequacy of some mica tape with a thermal conductivity of 0.173 BTU that we thought we might use to buffer the plastic My Little Pony from the heat of the soldering iron. When we wrapped the lower end of the soldering iron core in several layers of the tape and turned it on, though, the tape was quite hot to the touch. Time to try something else for insulation; we’ll be trying wool felt next.

In the course of fiddling with the soldering iron’s core, we inadvertently jiggled loose a wire that’s meant to connect somewhere inside the core that’s pretty much inaccessible without cutting into some solid-looking metal and potentially rupturing some more connections. Fortunately, we had a second cheap soldering iron on hand for just such an eventuality. This Weller model was far easier to open and—unlike the Chicago Tool one—sports a metal flange that presents an obvious way to connect to the Pony’s forehead.

Meanwhile, the Pony underwent the first of what will probably be several surgeries. 🙂