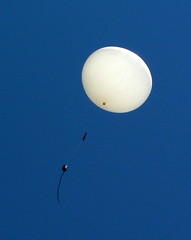 HacDC launched its first near-space balloon this past Saturday as part of a contest called Hackerspaces in Space that challenges hackerspaces around the world “to send a weather balloon, with payload, into near-space to capture pictures of the Earth’s horizon, to return the payload safely to the ground, and to retrieve the payload.”

To avoid Washington, DC-area restricted airspace and the Chesapeake Bay, given the southeasterly winds, the balloon was launched from rural Edinburg, Virginia. The payload included a camera running CHDK, a GPS receiver, and a transmitter sending APRS packets containing position information so we could track and recover it. The electronics were encased in a foam shell tethered to a parachute and the helium-filled balloon, which we calculated would burst at around 80-85K feet, around the same altitude at which we had a nichrome wire set to cut the balloon free if it hadn’t yet burst.

Here’s a map plotting the position data received from the balloon’s payload. Somewhere in the course of the flight it seems to have stopped transmitting, so the recovery team relied on the last-known and predicted positions to try to receive some potentially-degraded signal, but none was detected. The payload has not yet been recovered, though it’s still possible someone will find it on their property and call one of the contact numbers listed on the outside.

Photos of the launch and recovery effort by Katie, Mark, and Bryce—who also posted a personal account of the day’s events—are online.

The team is tentatively planning a second launch with a newly-assembled payload on Sunday, 15 August.