The mere fact that people are doing experiments which explore time travel, and publishing their results in respected peer-reviewed journals is pretty damn amazing. The article, https://www.physorg.com/news/2011-03-grandfather-paradox.html talks about a series of experiments that are being performed by folks at MIT and elsewhere to see exactly what is preventing the grandfather paradox from occurring during time travel.

“Ah!” You might say – just make time travel against the laws of physics, and you can avoid the whole issue. Unfortunately, or perhaps fortunately, travel on the so-called “closed timelike curves,” or “CTCs” is allowed by general relativity. The problem has been how to resolve issues like the case when you show a mathematician a proof from the future and she proceeds to publish _that_proof_. The question about where that proof came from is left as an exercise for the reader. For all the details, you can read the complete paper at Physics Review Letters: https://prl.aps.org/abstract/PRL/v106/i4/e040403

It appears that our friends at NYC Resistor and Alpha One Labs may have some interesting neighbors – apparently some fish in the Hudson River have been mutating in order to evade the high levels of dioxin and other toxins in the water. https://www.sciencenews.org/view/generic/id/69976/title/Packing_away_the_poison

The problem, of course, is that as soon as something eats _those_ fish, they get an even heftier dose of the toxin – and so it goes. The article over at Science News is actually pretty interesting, and demonstrates how living systems can quickly evolve to adapt to new circumstances. As always, I am a sucker for mutant monsters and toxic waste…

Thank to help from several of my fellow HacDCers, I have my HacDC website access working again, and you know what that means- more SCIENCE content! Today a quick pointer to a fascinating article on the computer simulation of a mammalian brain – or at least an important portion of one- the neocortical column from a common laboratory mouse. The cool thing is that they generated much of the data needed to run the simulation (at the scale of one processor per neuron right now) by using laboratory robots to generate a huge number of experiments on living mouse cells, the data from which were put directly into the simulator. Very, very interesting approach, and an equally cool result- reproducible prediction of the brain’s response to stimuli by the model, which matches perfectly with what is observed in the living mouse. We are getting close to where we are only Moore’s Law away from being able to do the same thing with a human brain. If you read the article here: https://seedmagazine.com/content/article/out_of_the_blue/ be sure and ask me about my related funny Terry Sejnowski story. 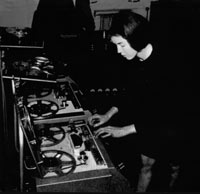 It seems fitting on Ada Lovelace day for our group of intrepid hackers to celebrate the life and achievements of Delia Derbyshire.  Born in Coventry in 1937, she has become a quintessential hacker  goddess and one of the early founders of electronic music.  Unsung for many years because of the BBC policy of not crediting by name the Radiophonic Workshop contributors, who were seen as simple “sound effects” people, her work was largely unrecognized for many years by the larger electronic music community.  Famous largely now for her efforts on the instantly-recognizable title music for the “Dr. Who’ television show, her work spanned a wide range of electronic genres, reaching its real heights in moody, ambient soundtracks for a range of BBC shows- the best of which were science fiction.

What many do not realize is how primitive the tools used to compose this music were- often using only  banks of single-tone audio frequency generators and reel-to-reel tape decks.  Delia would carefully cut and paste beat loops of tones and found sounds, and then painstakingly beat-match the loops on banks of recorders, recording the result on other decks.  By doing this over and over, she could get remarkably intricate layered compositions.  It is this spirit of remarkable innovation and craftwork that has has endeared her to many electronic musicians, including Sonic Boom (Peter Kember,) who was collaborating with her during the 1990s until her death, long after she had left the BBC and electronic music.

Inspiration can be found in online collections of her work, and in plays ad performances about her life and times.  With a new generation of electronic musicians strongly influenced by the DIY/hacker ethic, it is not surprising to see a significant rise in interest in Delia Derbyshire and her works.  Her influence will continue to be long lived, and like Ada herself, Delia Derbyshire has proven to be a visionary pathbreaker and an inspiration to visionaries everywhere.

#hacdc on irc.freenode.net
(or via chat.hacdc.org)